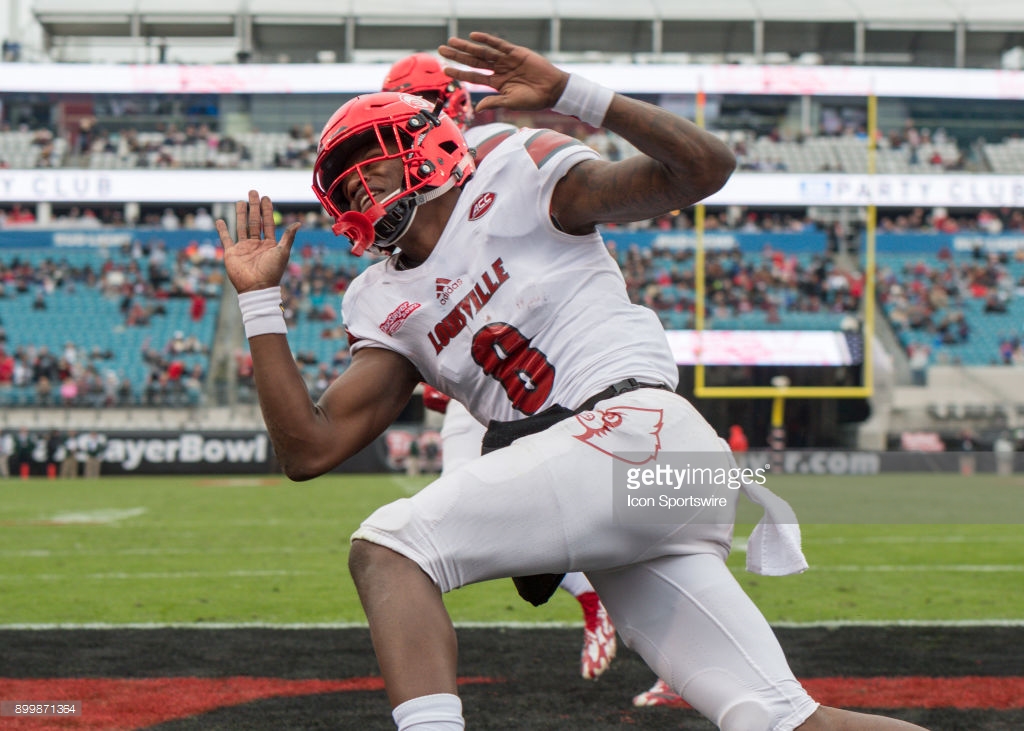 As if we needed any more proof that the mainstream sports media is as left-wing as the mainstream media in general, we bring you this nugget from the New York Daily News — the NFL is racist because Lamar Jackson isn’t the No. 1 overall pick.

Carron J Phillips is the writer and the New York Daily News saw this fit to print as actual news or realistic commentary.

Lamar Jackson has the stats, all the physical & mental tools, and the resume to be in consideration for being the first QB selected in tomorrow night’s @NFL Draft.

I wrote about it.

However, this type of writing is par for the course for Phillips.

I mean, Carron J Phillips’ own Twitter bio reads like the following: “Columnist for the @NYDailyNews focusing on the intersection of Social Issues, Race & Sports. Former @PABJ Journalist of the Year. Sagina. Morehouse. Newhouse.”

Could Phillips’ job title include any more Social Justice Warrior buzzwords or what?

However SJW-focused Phillips is, his commentary falls flat in a matter of two sentences in to the article. That’s because it started like this:

Lamar Jackson won’t be the first quarterback to have his name called Thursday night during the first round of the NFL Draft.

In fact, it’s possible he won’t be drafted in the first round at all.

No convincing or credible mock draft or analyst actually has Jackson slipping out of the first round, and most believe he will be gone within the first half of the first round. It’s just another case of lazy journalism to fit a narrative at work. All it would take is a google search of “NFL mock draft 2018” to prove him wrong.

If you don’t believe me, here’s a list of where Jackson is on mock drafts from the Google search I just did while writing this article (on the same day that Phillips’ article went to print and digital forms).

Phillips tries to insinuate that teams like the Cleveland Browns are going to pick someone else over Jackson just because of his race.

Nevermind that Jackson never completed more than 59.1 percent of his passes in a single season during his college career, or the fact that he barely fits within the parameters of a “prototypical NFL quarterback” according to his measurables…or the fact that many scouts see him as one of the most dynamic athletes but have questions about his passing acumen

I mean, this is a guy who rushed for over 1,500 yards in back-to-back seasons as well as 39 total touchdowns in the last two years. It isn’t as if we’re talking about a spread quarterback or an option-first guy either. Jackson often was running for his life thanks to a less-than-stellar offensive line and put his team on his back as a runner almost as often as a passer (232 rushing attempts to 254 passing completions).

Jackson is the first quarterback since Michael Vick to make the league really wonder where he fits in. That’s not to say he’s not talented or worthy of being a high draft pick, it just means the team that picks him must be confident that he fits the system or they can build an offense around his skill set.

Phillips argument basically comes down to this — one former NFL GM made a statement back in February saying Jackson belongs at wide receiver and not quarterback, therefore the whole of the NFL is racist and holding Jackson back from being the No. 1 overall pick.

That’s all that Phillips brings to our attention to make his broad point about the NFL as a whole.

He never bothers to point out that some of the same critiques (in terms of fit to a team) are coming up surrounding names like Josh Allen, Sam Darnold, Baker Mayfield and Josh Rosen. All five of them have legit question marks surrounding them (something I discussed on the podcast this week), but it must be racism at play to ask questions about fit with Jackson and Jackson only.

Funny how Phillips narrative also falls apart when looking at the Cleveland Browns organization. After all, they are so racist that they have kept around a black head coach, who is 1-31 in two seasons on the job, and drafted a black quarterback just last season.

Sure, DeShon Kizer didn’t work out and has since been shipped off to Green Bay in a trade for a former 1st round cornerback and a swap of some draft picks. But, that’s about production and not race..or is it, what with a white GM in John Dorsey and all…right Carron Phillips?

Maybe Phillips is after some attention, because he’s a writer I have literally never heard of before, and I kind of do that for a living and all…or maybe Phillips is just up for some race-baiting to get clicks? Whatever the motivation, it isn’t based in reality. Yet, the New York Daily News believes this type of commentary is fit to print and be proud of.

Don’t believe me, try this gem to end his column:

Because if a black man can’t even go to Starbucks without getting arrested, then how in the hell do you expect a league that’s blackballing players for protesting police brutality to select a black quarterback before the white ones?

Yes, because these two things are analogous? Those awful racists in the NFL with 70 percent of its players being black and all. The same NFL that is so racist that three of the last seven quarterbacks to be drafted No. 1 overall happened to be black.

You know them as JaMarcus Russell, Cam Newton and Jamies Winston. All three who came in with questions about attitude, legal troubles and their passing abilities and were still drafted No. 1 overall?